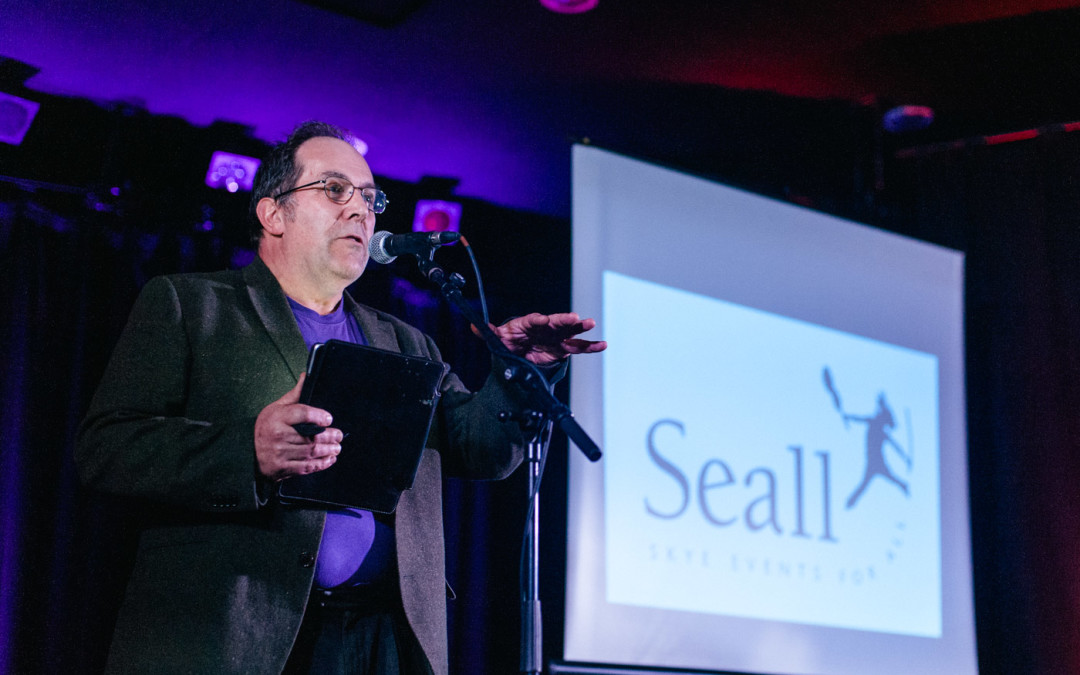 Following recent success at the Traditional Music Awards in which SEALL won Venue of the Year, Duncan MacInnes, one of The Touring Network’s most established promoters, takes part in an interview with Gordon. We learn about his past as an event organiser, what inspired him in the first place and what’s different about it now.

What inspired you to become a promoter, and how did it happen?

“Initially, over 30 years ago, it was a gradual process. I was offered, as part of the local drama group I was in, a mime theatre show and the community responded, so it seemed like a fun thing to do. Then I worked at a visitor centre with a restaurant that cried out for music, so I did that. Then all of us in the Highlands were inspired and supported by Peter Quillam-Cain, the Council Arts Officer, to promote more events. I established a community-led promoting group and 25 years later…”

SEALL, or Skye Events for All, were one of the original members of the then Promoters Arts Network, and indeed Duncan himself has played an integral part in the development of the Network over the years. Not only did Duncan act as the PAN administrator for a number of years, but he also wrote Don’t Panic – A Guide for Local Arts Promoters, published by the Scottish Arts Council in 2002, which we often still refer to here in the office.

Now 25 years since they began, SEALL has been voted as ‘Venue of the Year’ at the Scottish Trad Music Awards, held in early December. This highly prestigious event was televised live on BBC Alba and included a wide range of awards for bands, individuals, CD, clubs and organisations all promoting and creating music in Scotland. Duncan, Director of SEALL, collected the award and as you might imagine when 1,000 Scottish traditional music enthusiasts get together, a good time was had by all!

How has rural touring changed for you and your venue over the years?

“Rural touring used to be almost exclusively theatre. Members of the Highland network could meet twice a year and organise a complete tour for each theatre company by a show of hands. It has now become much more diverse and plentiful. There is a vast amount of traditional music on offer. Promoters are less connected to each other and I think it is more difficult for touring companies to plan sensible tours, because there is so much going on. Quality is generally high, but we get far fewer visits from good experimental London-based theatre, such as Ridiculismus. They have got tired of travelling the length of Britain in an old white van.”

High quality experimental work we want to see more of too Duncan! One of the topics for discussion at our Spring Gathering next month will be Experimentation in Programming, so we’re looking forward to debating the topic with the promoters and performers in the room.

You only have to log in to Tourbook to see that there are indeed a huge number of acts, in all shapes, sizes and genres, keen to tour the Highlands, and with almost 60 promoters in The Touring Network, all programming independently, keeping everyone connected and keeping touring simple isn’t easy. Especially when many of the Touring Network promoters do it all voluntarily, whilst juggling busy lives.

The most active Touring Network promoter, last year SEALL promoted over 60 events, right across all performance art forms, with an average of 70 audience members per event. For a small rural community, this is amazing, and SEALL are obviously doing something right!

What is your most recent stand out moment in promoting at SEALL?

“Our most recent gig on 23 January was life affirming! SEALL is 25 years old this year and we had not had an event for since early December. The weather was not good and we had a visit from 3 musicians from Cape Breton, led by ex-Premier Rodney MacDonald. We sold 18 tickets, expected 25, but almost 60 turned up, some travelling for 2 hours from Applecross, Lochcarron and Dornoch and beyond. The music was brilliant, the audience enthused, and it was one of those nights that confirm for us why we do it. During the concert Rodney called up local step-dancer John Sikorski, who had met Rodney in Cape Breton some years previously. John declined as he had non-danceable trainers on. ‘Come up here’ said Rodney, who proceeded to take off his own dancing shoes and hand them to John. No excuses, Cape Breton style!”

As well as their regular programme of events, SEALL also runs the two month long Skye Festival in July and August in conjunction with other community groups. The main venue is in Sabhal Mòr Ostaig, the Gaelic College on Skye.