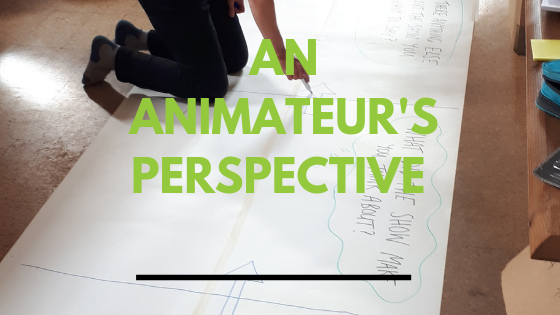 A simple concept – to invite Eigg to watch a 45 minute snippet of Dark Carnival: Unplugged in development, but with a twist.  Through our initial visits, meetings and sing–songs on the island it was decided that our new pal Nan, a primary school teacher on Eigg and musician in her own right, would perform alongside Biff and Matt.  Further to that, the singing group who I had met and sang with on my first visit would sing along with Biff’s last tune as secret audience performers, hidden in the crowd.  It was a 50/50 split.

Biff and Nan had an amazing energy as they performed.  Matt, the writer and director, who would normally not be on stage, was the narrator for the evening, playing with his words as they came out and getting direct feedback from the audience that were right there, staring him in the eye.

It was incredible to watch.

The venue was a big factor in the success of the evening.  Right at Eigg’s heart, the tearoom is the centre of the action – by the pier, by the shop, by the beer, everyone meets here and everyone is familiar with the space.  Something that came up during our Cove Park residency was that in small communities the village is your living room – your home environment extends much further than your own front door.  Its easier to have something unexpected happen in a space that you are really at ease in.  It’s weird, but it’s easier.

The tearoom was bustling with people sitting and standing, and kids were running in and out the whole time.  There was no sense of let’s sit, look forward and be quiet – there was more energy in it than that.  As the singing group joined in with Biff’s last song there was a moment of true magic.  People looked around with glee as one of the singing group sopranos harmonised with Biff in a burst of musical brilliance.

And it didn’t take long for more people to join in, feeling that permission was truly granted for getting involved.

After the performance most stuck around and continued the party.  There was a feedback wall that I had been dubious folk would add to, but it was being populated quickly with colourful post it notes scribbled with useful comments – most of them incredibly positive.  And as I looked around there was a joining together, of artists, promoter and audience – it was right there, happening.  There was a feeling of warmth and of progress from our initial visit (which had been harder).

Maybe this was BRAW in action, right in that moment.

But what did we learn from the whole thing?

In this experimental stage, this event opened-up possibilities for the development of the ‘unplugged’ version of Dark Carnival.  Above and beyond these lessons, it enabled the team to see that the show could really work as a more intimate piece of theatre – with little to no tech and in any space, even outside.  We all left Eigg with a new spring in our steps.