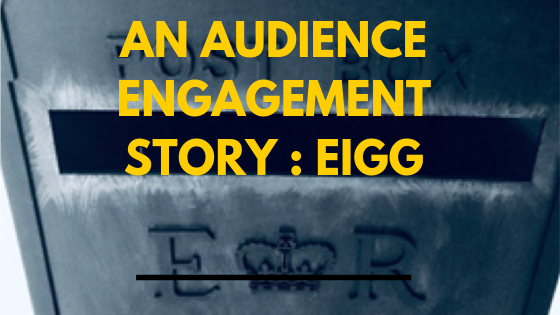 Animateur Kate tells us what audience engagement means, what effect it has and how she went about it on Eigg

The aim of any of our audience engagement activities is

To enliven the period before a performance.

To open up a possibility of conversation, anticipation and ultimatly enrich the experience as a whole,

not detracting, but adding to the story of the show.  Easy….

Vanishing Point’s show for Eigg ‘The Dark Carnival’ created specific challenges.  A show about the afterlife, about what happens to our consciousness after we die – but it was funny.  It touched on difficult themes with humour, singing and drinking.  As I got to know the show and spoke with Dark Carnival’s writer and director, Matt Lenton, it was clear that whatever I did would have to be light–hearted, ultimately in-keeping with the tone of the show.

The obvious starting point for an engagement theme was death.  I went through lots of ideas around death folklore, death cafes, death music, trying to find a hook for Eigg.  But the real creative process started when I worked alongside Lucy Conway, Eigg’s promoter. She had the idea of giving out shoeboxes to people and asking them to collect objects that they would take with them to the grave.  A contemplative, soft and personal activity which would enable people to start thinking and talking – a great idea.  But there was something that felt too serious about it – too sombre.  I wanted to inject something sillier and that’s where our final idea came from: Death Island Discs.  We asked people to choose one track, one piece of music, they would take with them to the afterlife.  These were collected both physically, through a spooky black post box left at the Eigg pier, and through various internet channels.  All the submissions were then compiled to create a playlist which was then presented to Eigg on the night of the show.

As an extra added interaction, as the tracks came in, once a week, Ghost DJ (big secret reveleaved….it was me) would reply online with some tracks in response.  This added an extra level of conversation and surprise that worked to give something back as people added to the story.

We had great success with this activity and extended it to two further venues on the tour.  People got involved so openly, adding personal reflections along with their tracks, funny, thoughtful, sad and all in between.

Lucy stated that the pier in Eigg was buzzing with talk of music and favourite tracks and it encouraged people to continue their conversations at the show.

In creating Death Island Discs I realised that it is possible to host audience engagement in ways that don’t involve shoehorning yourself into a community physically.  This always sat uncomfortably for me as someone who lives in a small village.

Parachuting in, trying to meet people, searching for folk to interact with, all the while with this strong ulterior motive.

Depending on the place, it can be awkward and unnecessary.  It’s all a balance, learning about the place, knowing its style, knowing your own and being honest about that dynamic.

There were strong learning outcomes from this exploration in Eigg: tone is vital, too many events before an event is too many, being light-hearted can encourage deeper interaction in the long run and working through ideas is more effective with someone who knows their community.  I was glad it was the first experience as it strongly effected my approach with the other two projects.