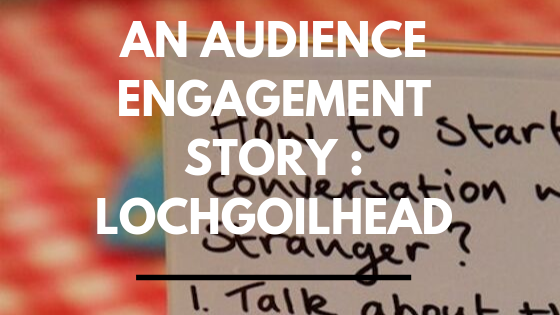 Animateur Kate tells us how she’s learned not be afraid to fail; everything is valuable when you are exploring

Written by – Kate Wieteska in August 2016

This was a really tricky one for me. Lochgoilhead was a project I had not had much interaction with. After my initial visit to get a lay of the land we decided that the assigned artist, Heather Marshall, would work more effectively alone.

Her approach seemed pretty BRAW as it was.

I just followed the story from afar – Heather visited several times, attended community events such as the Burns Supper and the Gala and hosted some café style chats herself. All the while she collected stories, got to know the area and crafted the show.
In the last month I was asked to step in and work with Joni Prescott, the promoter for Argyll Arts Collective, to add an extra engagement activity before the show. This was not a reflection on the quality of engagement up to this point, rather a chance to fill a wee time gap between Heather’s last visit and the show; giving Joni a chance to meet and chat with her audience as a promoter. 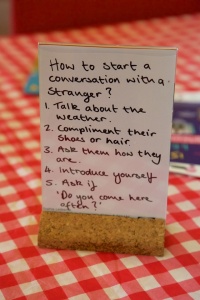 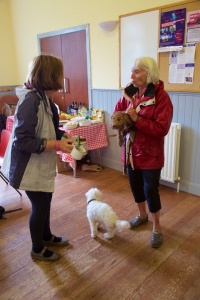 This was difficult as I had not had the connection with this project that I had had with the others. It showed up how important it was to know about the artist, the community, the promoter and the show, as I felt I did in the other locations. Some of my initial ideas clashed with the company as we simply didn’t have the time together to build that mutual understanding and it felt like I was jumping in too late.

We did what we could, but it was rushed.

The final idea was to set up a space to allow for conversation around the show. To allow for communication about the themes which may have been hard to get across simply through poster publicity. On the Thursday before the show we set up a pop-up café in the village hall with the intention of filling the space with creative interactions – around the theme of random meetings. Conversation starters on the tables, two player games – playing with the idea of what happens when people are thrown into a situation together when they wouldn’t normally meet, just as the characters are in the show.

The café was a lovely space, set up beautifully by Joni and folk from the village, but I felt I didn’t have enough material to populate the space to make it obvious what was being asked of people. There was conversation around the show, but it is possible that the people who came to the café would have come to the show regardless, we weren’t reaching the people who would have benefited from that time to find out more. There were limiting factors, mainly time and location – but it wasn’t quite right anyway.

It was important to try – and it made me believe in the process that had been set up by the structure of BRAW – throwing people together from the beginning, allowing all members of the team to be part of the whole process. The main thing, giving people time. Building these relationships was crucial and for many reasons it hadn’t happened here. Another thing BRAW has taught us all however, is to not be afraid to fail, everything is valuable when you are exploring.