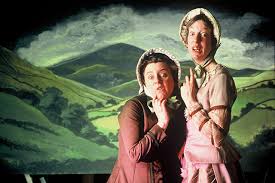 Withering Looks takes an “authentic” look at the lives and works of the Bronte sisters – well, two of them actually, Anne’s just popped out for a cup of sugar.

Who is the Bronte’s mysterious neighbour, Mr Moorcock of Ravaged Heath House, and what does the maniacal laughter coming from his attic mean? Do unfulfilled souls really wander the wild and heather clad moors? Who should Cathy marry, Heathcliff or David Niven?

Withering Looks has won a Manchester Evening News Theatre Award and the Critics Award for Comedy at the Edinburgh Festival. LipService have just won the Stage Door Foundation Award for Excellence.

“Cancel all other engagements for the glorious LipService”
The Independent