Raymond Mearns has been a full time Comedian and Actor since June 2003! Prior to this he had done comedy part time whilst working as a Communications Sales Manager for Arthur McKay based in Edinburgh. Notable credits up till that point included:

In mid-2003 Raymond was cast as Big Roddie in The Feature Film “Ae Fond Kiss” directed by Ken Loach.

In 2004, Raymond was a founder member of the improvisational comedy sketch group Dance Monkey Boy Dance!!! Which saw a sell-out run at The Edinburgh Festival Fringe and then onto New York where DMBD performed at: The Improv and The Gotham Comedy Club, alongside the first ever New York Comedy Festival.

In November 2005 Raymond returned to New York where he played to a sell-out crowd at The Laugh Factory with the Show “Laughs Across the Ocean” in collaboration with New York Comic, Danny Lobell.

2006 included appearances on “Off the Ball”, “Rebus” and the pilot Episode of “Legit’” where Raymond first played the character “Happy Boab”. At end of 2006 Raymond shot his second feature film for Ken Loach as he played the character: “Andy” in “It’s A Free World”

In 2007, “Legit’” the series was commissioned and Raymond spent a memorable summer playing “Happy Boab” whom the Sunday Mail described as: “A character who brings so much sunshine into the world he deserves his own show!” Raymond also performed at the Edinburgh Festival Fringe in his new one man stand-up show: “Recovering Arsehole”. The year ended with Raymond shooting a series of commercials for the Sun Newspaper that included cameo appearances from Frank McAvennie and John Smeaton. 2007 Also saw the release of Raymond’s first DVD which was recorded at the Stand Comedy Club during the Glasgow International Comedy Festival

2008 saw Raymond assume the Role of Executive Producer on the feature film “Next Time Ned”, written and directed by Thomas McCue. Raymond also played the main character “Ned Randall” and contributed to the score. This was followed by a number of trips abroad to entertain British Troops and then onto Edinburgh where Raymond performed another one man show “Shaggy Dog Stories” of which Chortle said: “Virtually every line that issues from this man is funny, some of them very much so!”. 2008 also saw the birth of the smash hit: “Limmy’s Show” created by internet sensation Brian Limond and Raymond was chosen as a member of the principal cast for the Pilot. At the end of the year Raymond also landed a part in the “Rab C Nesbitt” Christmas Special.

Raymond embarked upon his first tour of Scotland in the spring of 2009 and this was followed up with two quite unusual jobs! The first of these was to promote the Glasgow Comedy Festival, where Raymond was asked to provide a completely improvised comedy guide to the city from an open top tour bus. Then a few weeks later Raymond was hired to provide additional voiceover on “The Illusionist” an animated feature film directed by Sylvian Chomet. Both of these proved to be surprise hits as “The Illusionist” was nominated for Best Animated Feature at the Oscars in 2011 and the Bus Tour was seen all over the world and this was borne out when, to Raymond’s delight, he was recognised whilst on tour in Western Australia in 2010. Raymond was then drafted in to join the cast of BBC Radio Scotland’s sketch comedy programme “The Ellis and Clarke Show” and then onto Series 1 of “Limmy’s show” where Raymond cemented his reputation as a comic actor of significant ability. At the very end of 2009 Raymond was flown to Prague to film the TV commercial for Cheestrings that was aired UK wide in 2010 and 2011.

In 2010, Raymond was cast in the BBC Radio Scotland Sit-com “No Hard Feelings” playing a range of different characters alongside John Gordon Sinclair. This was quickly followed up by him landing the role of “The Pharmacist” in the BBC Drama “One Night In Emergency” written by Gregory Burke and starring Kevin McKidd. A Significant part of 2010 was also spent setting up RAB Productions, an innovative new production company that Raymond runs in conjunction with Calum Weir to produce bespoke comedy based films for the corporate and educational sectors. At the end of 2010 Raymond did some shows in Western Australia and also did the short film “TUMULT / An Incident in Time” directed by award winning writer/director John Barrington.

In the first three months of 2011 Raymond completed a successful mini tour of venues across Scotland. He also appeared in the new series of “Rab C Nesbitt” and in the BBC’s Scottish Soap Opera “River City”. His second DVD “Shaggy Dog Stories” was released in April of 2011 and he then went on tour with “Pete Doherty” doing support slots at The Shepherds Bush Empire and various venues in the North of England, the tour ended abruptly on the day they were scheduled to appear in a sell-out show at the Barrowland in Glasgow owing to Doherty being jailed for a drug related offence. In the Summer of 2011 Raymond went on to The Edinburgh Festival Fringe with his Show: “Everything You Ever Wanted To Know About Stress But Were Afraid To Ask!” which was performed at the Stand Comedy Club. Jay Richardson described the show as “Exceptionally Funny” and “Cathartic” in The Scotsman and Fest magazine described the show as: “A constantly funny hour”. The year 2011 ended with Raymond being chosen as one of the comics to represent Glasgow at the prestigious New York Comedy Festival.

In January 2012 Raymond travelled to Kuala Lumpur to entertain the Saint Andrews Society and honoured guests at their annual Burns Supper. Also in 2012, following on from the success of his 2011 Fringe Show, Raymond was booked by a number of organizations to deliver his stress busting comedy show to their employees, this was received enthusiastically by those organizations who now consider the show to be a valuable staff development tool. Raymond has worked as a tutor for the charity Universal Comedy since its inception in 2006 and in 2012 Raymond was delighted to be given the first of Universal Comedy’s Graduate Courses to tutor, the participants on the course were all people who had previously benefitted from the work of Universal Comedy and it was Raymond’s goal to take the creative process further for the group, all of whom have various mental health issues ranging from depression and bipolar to schizophrenia. The outcome of the course surprised everybody! It resulted in the production of a 15 minute filmed comedy sketch show which was created from the combined talents and contributions of the participants. In April 2012 Raymond was cast as “Wee Martin in “Doors Open” an ITV comedy drama based upon the book by Ian Rankin and featuring Douglas Henshall, Stephen Fry and Lenora Crichlow. The Film was shown across the UK on ITV1 on December 26th 2012 and has subsequently been sold for transmission to other countries including the USA. Another visit to the Edinburgh Festival Fringe followed, in the summer of 2012, with his brand new show “Rock N Roll Comedian – The Therapy Sessions” this show catalogued Raymond’s personal battles with a number of life changing events and was very warmly received by audiences, Ian Gorman reviewed the show for The Skinny and said: “You’ll be hard pushed to find a more enjoyable or cathartic hour of comedy anywhere else this summer.” After the Fringe in 2012 Raymond’s work with Universal Comedy took him on a tour of hospitals around Scotland with the show “Health Scare – The Musical”. Following this Raymond began rehearsals for “Sleeping Beauty” – the 2012 Real Radio Panto. Produced by Scott Kyle’s NLP Theatre Company and performed at Hamilton Townhouse and Rutherglen Town Hall, Raymond played The Dame – “Fairy Kipling”.

In the first few months of 2013 Raymond will be busy working with The Comedy Unit on “Planet Mearns” a comedy sketch show for BBC Radio Scotland. In February 2013 it was smiles all round as TUMULT was nominated in the best short film category at the BAFTA‘s, and though TUMULT did not win the main prize the nomination stands as testament to the quality of this innovative and brilliant short piece. The story continues…in the meantime Raymond continues to do live stand-up comedy most weekends at various clubs across the UK and beyond. 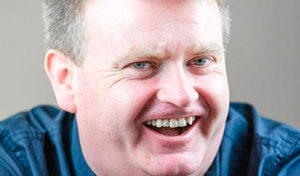 Raymond Mearns in Everybody Hates Raymond

As seen on “Limmy’s show” and BBC Scotland’s “Breaking the News”, Raymond Mearns is regarded as one of the very best live stand-up comedians in the country. He’s a regular at The Edinburgh Festival Fringe every year where he combines great story telling with finely crafted gags and razor sharp improvisation, and now he’s coming to the Burgh Hall with his stand-up show: “Everybody hates Raymond”. ‘Everybody loves to hear you speak the truth until you tell them the truth…