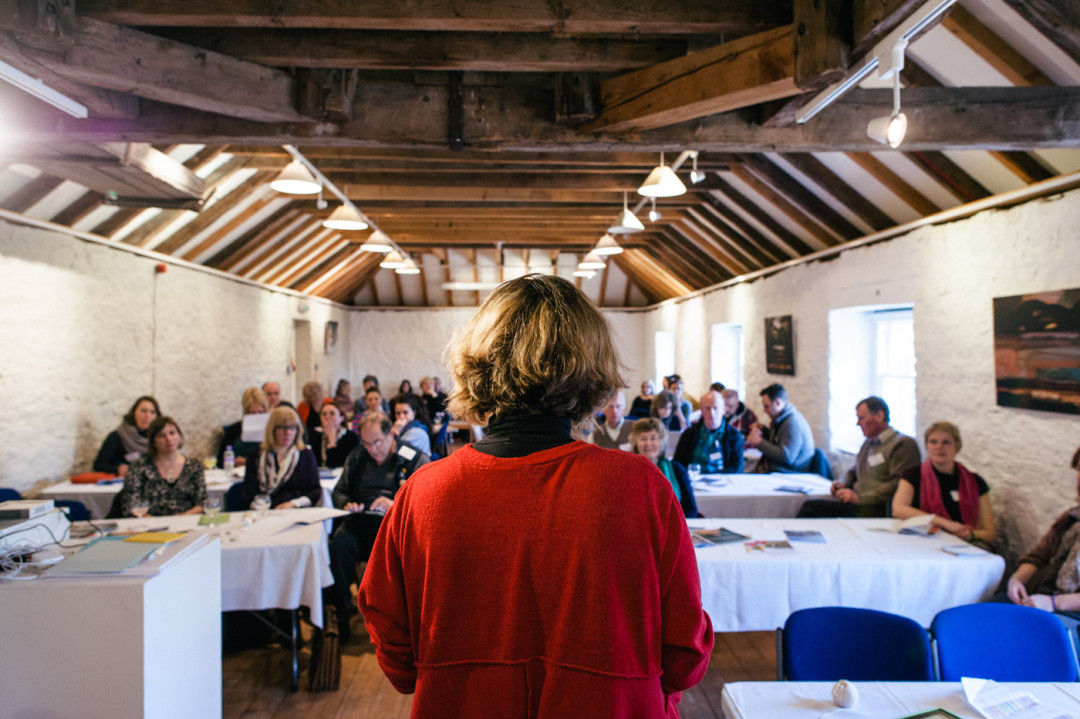 The Gathering in 2015 was produced in collaboration with the Cromarty Arts Trust, and took place in venues throughout the picturesque village of Cromarty. Venues included The Stables, The Old Brewery, the Victoria Hall, and the East Church

We are delighted that Gary will be joining us to launch the Spring Gathering with a keynote address.

Gary has produced work with and for companies such as the National Theatre of Scotland, Random Accomplice, the Traverse, The Citizens, Trigger, Company of Angels and OranMor. His mission is to make work that will entertain and challenge audiences in equal measures.

Adapted from her own book of poems, Amsterdam is a funny and exciting story of one woman’s search for love. It explores what happens when you abandon your responsibilities to chase your dreams. With the obligatory disapproving mother, the adrenalin of excitement, it takes the audience on an adventure.

ENGAGING WITH THE NEXT GENERATION

We are delighted to be joined by Sarah Gray, producer for children’s shows The Emperor’s New Kilt; Arthur the story of a King; Treasure Island (Wee Stories);Titus (Macrobert) and The Polar Bears Go Wild (Fish & Game),  as well as Lindsay Brown (Play Pieces) and Paul Fitzpatrick (Imaginate) for this panel discussion focussing on the role of young people as audience members, promoters and programmers.

Inspired by their 2014 tour of the Highlands & Islands, the Flanagan Collective’s new show Fable is a combination of storytelling, music & song. An exclusive first look for promoters at the Gathering, and a chance to shape the future of the show.

This session will explore the intricacies of sustainability within the arts and touring the Highlands. Led by Jane Wilde, who conducted a Carbon Study of Mull Theatre’s Highland tour of Doras Duinte & Rough Island in 2014, and Fiona MacLennan, Creative Carbon Scotland.

Attendees are invited to join Africa in Motion for a screening of this new South African feature film, which tells the story of Muzi, the son of an amazing pantsula dancer

WITH DAVID MCNEE, AND SUPPORT FROM IMOGEN HAY

Winner of BBC Radio Scotland’s Young Traditional Musician of the Year in 2014, Robyn is described as having one of the finest voices in Scottish music. Performing the traditional songs of her Scots and Irish heritage, we are thrilled to welcome her and guitarist David McNee to the Spring Gathering for what promises to be a very special evening. Support will be provided by young harpist, Imogen Hay from Invergordon.

This performance is open to the public.

An opportunity for performers, companies and other creative types who are attending the Gathering to pitch their work to promoters. Based on the 20 slides x 20 seconds rule, these fast paced pitches give a snapshot of who you are and what you do, providing a conversation starter over dinner later.

Remember When is an intimate solo performance by choreographer/performer Marc Brew with a prelude screening of a short dance film project behind the performer exploring the idea of perception – looking from past to present.

EQUALITY WITHIN THE ARTS

We will be joined by Tina McGeever (Out of the Darkness Theatre), Maggie Maxwell (Equalities & Participation Officer, Creative Scotland), Marc Brew (dancer) and Melanie Baines (promoter – Lochalsh Arts Network) for this thought-provoking discussion.

THE FUTURE OF RURAL TOURING

Artistic Director for PAL LABS, and Producer for the Small is Beautiful conference, Roanne Dods will facilitate this session, exploring  the Future of Rural Touring.

Lifeboat is the extraordinary true story of Bess Walder and Beth Cummings. Set in World War II, it is a story of courage, a story of survival and a story of enduring friendship.

Suitable for ages 9+, this performance is open to the public

Join David Francis (Trad Music Forum), Robyn Stapleton (BBC Young Trad Musician of the Year 2014), and our very own John Saich (former member of Capercaillie) to find out what makes a concert special and how to promote new music to your audience. What do touring musicians require from promoters to deliver an unforgettable show, and what do bands, ensembles and solo performers need to know about playing in rural venues?

“Because I am completely new to the role of promoter, I was able to meet experienced promoters, ask questions, listen and learn from them. I found new friends, offers of support and help, and gained a sense of confidence as a beginner.”

“This was my first Spring Gathering and it was great to meet the faces behind the email addresses and really get to grips with how The Touring Network can support us.”

“All very different and all exceptionally high standard performances. The excerpt from Mallory was very innovative and atmospheric in the East Church.”